Family is the smallest unit of the society. Whoever makes viloence in a family, also acts agains the society.

20 years on the education and human rights scene

Ariadne Foundation was set up in 1994 for the main purpose of organising cultural events and supporting international studies of Roma youth and to be the flagship or the representation of the Hungarian Roma rights.

Our mission is to create equal opportunities in every part of life, with a special focus on children and women as the most vulnerable social groups among the Roma communities.

After 1998, the foundation started to focus on new methodologies like art therapy and sociotherapy to prepare people for a life void of labelling, where they can attain personal fullness, and where individual and communal cultural diversity is respected within society. Further aim of our sociotherapy is to overwrite old patterns of “learned inability” and to develop self-identity and personal competence. 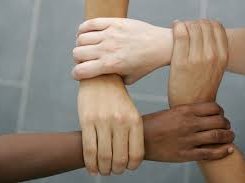 The foundation also organised the first Roma World Festival, called Rom Som, in 1996-1997.  There were several famous artists at the festival such as Fapy Laffertin, Sterfan Grapelli – former musician partner of Django Reinhart. The festival was welcomed by Bill Clinton, Desmond Tutu in a written form with the lines of Marques.

Since 2013 we have been working     in the framework of  Kontiki Ltd. which  sustains vocational schools TANEXT Academy  and Comenius Secondary School.

Between 2007 and 2009, the Foundation participated as co-organiser in the implementation of several ESF funded projects, such as HEOF and TAMOP.

From February 2007 until August a large number of anti-discrimination, tolerance strengthening and community building training was organised twice for employees working in the public sector. The training session was organised in many cities and towns.

In 2010, by the financial support of the Hungarian Government and Open Society Institute, the foundation implemented a post-traumatic conflict management training in 5 locations, following the Roma massacre. As the result of the program, the inhabitants of the Roma settlements started to rebuild their communities and initiated define and solve their main problems related to the social segregation.

In 2010, the foundation became the facilitating body/conflict management partner of the most disadvantaged areas of Hungary. This project was financed by the Ministry of Social Affairs.

Since 2000, Ariadne granted several supports by Charles Mott Foundation,  Phare, the Government of Canada, US Embassy and the EU.